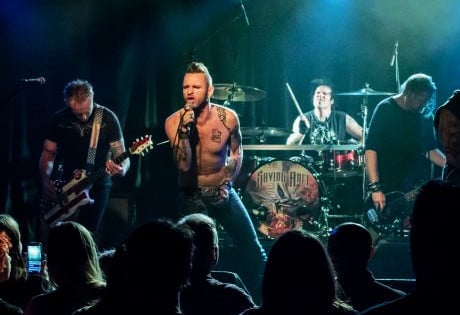 Look no further than WeddingEntertainment.com! We make it easy and stress-free to check availability and pricing for booking Saving Abel or any other act in the business. With over 26 years of experience in the industry, we have booked and produced thousands of events for clients worldwide.

The rock band Saving Abel was established in Corinth, Mississippi, by founding members Jason Null and Jared Weeks. The duo’s early music caught the attention of a producer who took Weeks and Null under his wing and helped them record their first demos. With the addition of Blake Dixon, Eric Taylor, and Scott Bartlett, Saving Grace rounded out its initial lineup and began self-marketing their first album in 2006.

Saving Abel’s star was slow to rise for the next few years, but the song “Addicted” eventually caught the attention of Virgin Music, which after hearing the song signed the band almost immediately. A self-titled debut album, Saving Abel, followed in 2008, and included the song “Addicted.” This time, the single rose all the way into the top five on the mainstream rock charts, bringing the album Saving Abel to gold status as well. A tour in support of Nickelback followed in 2009, and then immediately after Saving Abel launched their first headlining tour alongside supporting bands Pop Evil and Red.

Since that time, Saving Abel has performed at a number of music festivals, including the Rocklahoma Music Festival in 2010, and the band has released the albums Miss America and Bringing Down the Giant, featuring the songs “18 Days,” “Drowning (Face Down),” “Stupid Girl (Only in Hollywood),” “The Sex is Good,” “Miss America,” and “Bringing Down the Giant.” With the current lineup of Weeks, Null, Bartlett, Taylor, and Mike McManus, Saving Abel has recently returned to the studio to record their next album, Cracking the Safe, set for release in 2013.