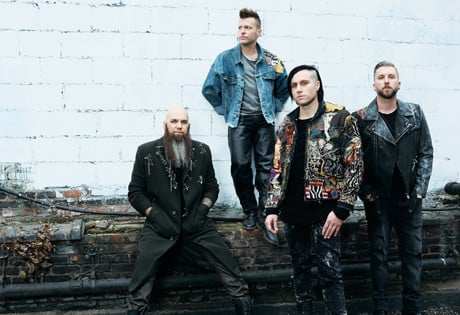 WeddingEntertainment.com makes it easy and trouble-free to check availability and pricing for booking Three Days Grace or any act in the business for your wedding. If we don't book an act for you, our service is free. For over 26 years we have booked and produced thousands of events for our clients worldwide. We can also handle everything necessary to produce the show for one all-inclusive price so there are no surprises. Simply fill out an entertainment request form and a booking agent will contact you to discuss the possibility of booking entertainment for your wedding.

Three Days Grace was formed in Ontario, Canada, in the early 1990’s, although the band did not rise to mainstream success until into the new millennium. Originally a grunge band, Three Days Grace spent the decade of the 90’s releasing demos and performing whenever possible, but it was the song “I Hate Everything About You” that finally caught the attention of Jive Records. Three Days Grace signed to the label, moved to the United States, and made preparations for a major label debut.

The self-titled debut, Three Days Grace, was released in 2003 and met with favorable criticism. Now with a more alternative-metal sound, Three Days Grace began to garner recognition as a breakout artist, and the band launched an extensive two-year tour to help support their debut. Eventually, Three Days Grace rose into the Billboard charts and into the top 10 on the Canadian charts, and reached multi-platinum status. The albums Life Starts Now (2009) and Transit of Venus (2012) followed, spawning the alternative hits “Just Like You,” “Home,” “Animal I Have Become,” “Pain,” “Never Too Late,” “Riot,” “Break,” “The Good Life,” “World So Cold,” “Lost In You,” “Chalk Outline,” and “The High Road.

Three Days Grace has been nominated for multiple industry awards, including four Juno Awards and recognition by Billboard Magazine for Rock Artist of the Year in 2007. Three Days Grace continues to perform and record with the current lineup of Brad Walst, Matt Walst, Neil Sanderson, and Barry Stock.