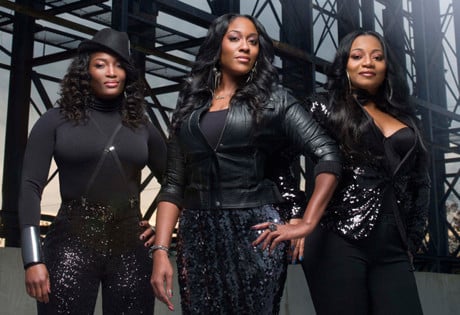 Looking to book SWV entertainment for a wedding anywhere worldwide?

WeddingEntertainment.com makes it easy and trouble-free to check availability and pricing for booking SWV or any act in the business for your wedding. If we don't book an act for you, our service is free. For over 26 years we have booked and produced thousands of events for our clients worldwide. We can also handle everything necessary to produce the show for one all-inclusive price so there are no surprises. Simply fill out an entertainment request form and a booking agent will contact you to discuss the possibility of booking entertainment for your wedding.

The American R&B trio known as SWV (Sisters with Voices) was established in 1990 as a gospel group, founded by members Leanne Lyons, Tamara Johnson, and Cheryl “Coko” Clemons. After recording their demo, SWV began circulating the tapes to record executives throughout the country, eventually garnering the attention of RCA Records.

Sisters with Voices released their debut album, It’s About Time, in 1992. The album was an enormous success, rising to triple platinum status and spawning the hit singles’ Right Here,” “I’m So into You,” “Weak,” and “Right Here/Human Nature,” featuring Pharrell Williams. Addition singles included “Always on My Mind” and “Downtown,” and set the stage for SWV’s sophomore effort, New Beginning, which arrived in 1996. In between, SVW provided the song “Anything” for the soundtrack to the movie Above the Rim, and the song also rose into the top twenty on the mainstream charts.

Following New Beginning, SWV released Release Some Tension (1997) and A Special Christmas (1997), giving audiences the additional singles: “You’re the One,” “Use Your Heart,” “It’s All About U,” “Can We,” “Rain,” and “Co-Sign.” Shortly after, though, SWV disbanded, and the individual members eventually went on to solo careers. Coko released her own album, Hot Coko, in 1999, to moderate success, but she had far greater success with her gospel debut, Grateful, which arrived in 2006. Lyons and Johnson went on to other side projects as well, and SWV remained quiet as a group until recently.

In 2012, Sisters with Voices returned to the scene with the long-awaited album, I Missed Us. The album has rebooted the career for SWV, and fans anticipate additional performances and music from the trio in the near future.