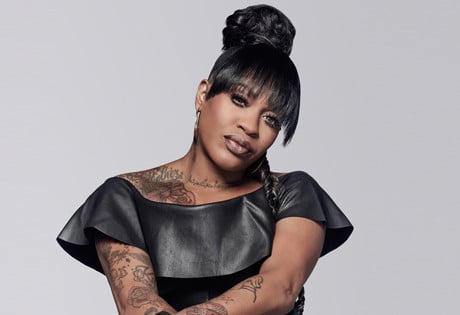 WeddingEntertainment.com makes it easy and trouble-free to check availability and pricing for booking Lil Mo or any act in the business for your wedding. If we don't book an act for you, our service is free. For over 26 years we have booked and produced thousands of events for our clients worldwide. We can also handle everything necessary to produce the show for one all-inclusive price so there are no surprises. Simply fill out an entertainment request form and a booking agent will contact you to discuss the possibility of booking entertainment for your wedding.

The American R&B singer known as Lil Mo was born Cynthia Karen Loving in 1978 on Long Island, in New York. Loving moved around frequently as a child, since her father served in the military, and the family relocations took her to North Carolina, Georgia, Atlanta, Texas, and finally Maryland, where the family settled in Baltimore. Although Cynthia harbored dreams of becoming a performer throughout her childhood, it was in Baltimore that she began to take her aspirations seriously, recording her first demos and submitting them to producers and labels.

Lil Mo’s demos brought her to the attention of Missy Elliot, who brought the artist into the studio and helped her facilitate her first contract with Elektra Records.  Lil Mo would go on to work very closely with Missy Elliot throughout much of her career, and it was through collaborations and support from Missy Elliot that Lil Mo’s debut, Based on a True Story, finally arrived in 2001. The album featured the singles “Ta Da,” “Gangsta,” and “Superwoman Pt II,” which went on to rise into the top five on the R&B charts in the United States and crack into the top twenty on the mainstream charts.

Since that time, Lil Mo has released the albums: Meet the Girl Next Door (2003), Pain & Paper (2007), and P.S. I Love Me (2011.) The albums have featured additional singles such as “4Ever,” “Ten Commandments,” and “Dem Boyz,” but Lil Mo has become equally as known for her appearances on hits by other major artists. Lil Mo can be heard as a featured performer on a number of chart-topping hits, including: “Wifey” (with Next); “Whatever” (with Ideal); “Put It on Me” and “I Cry” (both with Ja Rule); and “Can’t Let You Go” (with Fabolous.)

Most recently, Lil Mo joined the cast of the TV One series, R&B Divas: Los Angeles. Her cast-mates include Kelly Price, Chante Moore, and Dawn Robinson. Lil Mo’s most recent album, SCARlet Letter, arrived in 2014. The album features the songs “I’m a Diva,” “L’s Up,” and “Should’ve Never Let You Go.”