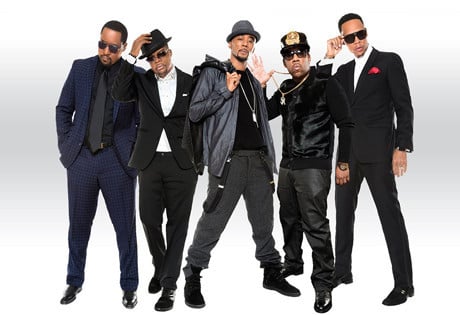 Look no further than WeddingEntertainment.com! We make it easy and stress-free to check availability and pricing for booking New Edition or any other act in the business. With over 26 years of experience in the industry, we have booked and produced thousands of events for clients worldwide.

The R&B group New Edition was formed in Boston in the late 1970’s. The original lineup of Ralph Tresvant, Ronnie DeVoe, Bobby Brown, Michael Bivins, and Ricky Bell came together as schoolmates greatly inspired by the music of the Jackson 5. Establishing themselves as a “new edition” of such iconic groups of the early 1970’s, New Edition caught the attention of producer Maurice Starr, who took control of the group and financed their smash-hit debut, Candy Girl.

Candy Girl was released in 1983 and spawned the hits “Jealous Girl,” “Candy Girl,” “Is This the End,” and “Popcorn Love.” Disputes over royalties quickly led to a split from Starr and an even bigger recording deal with MCA Records, which released the sophomore album New Edition, an even greater success than the group’s debut. The group released All for Love (1985) and Under the Blue Moon (1986) and gave audiences the hits “Cool It Now,” “Mr. Telephone Man,” “Lost in Love,” “Count Me Out,” “With You All the Way,” “Earth Angel,” and “A Little Bit of Love (Is All it Takes)” before Bobby Brown departed the group and was replaced by Johnny Gill. With the new lineup, New Edition went on to release Heart Break (1988), featuring the hits “If It Isn’t Love,” “You’re Not My Kind of Girl,” and “Can You Stand the Rain.”

Bobby Brown’s solo success created a bit of unrest among the New Edition members, however, and so in the mid 1990’s the group took a lengthy hiatus so that other members could pursue other projects. They reunited for Home Again in 1996, featuring the singles “I’m Still In Love With You” and “Hit Me Off,” but rivalries among the group members once again pulled them apart for a number of years.

In recent years, however, New Edition has performed publicly with its original lineup, including Bobby Brown. The group appeared at the BET 25th Anniversary Special and again at the 2009 BET Awards, and collaborated with New Kids on the Block in 2008. New Edition has recently switched to Geffen Records and kicked off a new tour in 2011, performing at the Essence Music Festival in New Orleans. Most recently, New Edition launched a 30th anniversary tour and has publicly announced the resurgence of the group with all members intact.