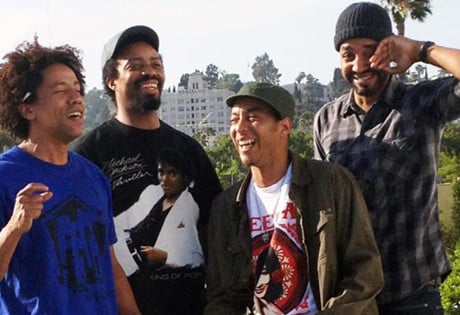 Looking to book Pharcyde entertainment for a wedding anywhere worldwide?

WeddingEntertainment.com makes it easy and trouble-free to check availability and pricing for booking Pharcyde or any act in the business for your wedding. If we don't book an act for you, our service is free. For over 26 years we have booked and produced thousands of events for our clients worldwide. We can also handle everything necessary to produce the show for one all-inclusive price so there are no surprises. Simply fill out an entertainment request form and a booking agent will contact you to discuss the possibility of booking entertainment for your wedding.

The hip hop group known as The Pharcyde was established in South Central Los Angeles in the early 1990’s, by founding members Derrick Stewart (Fatlip), Romye Robinson (Bootie Brown), Trevant Hardson (Slimkid3), and Emandu Wilcox (Imani.) Three of the group’s members had been working as dancers in the 1980’s, and after deciding to form their own group, The Pharcyde released a debut demo in 1991.

The demo featured the songs “Officer” and “Ya Mama” in addition to the song “Passin’ Me By,” which would go on to become their best known hit. Representatives from Delicious Vinyl were impressed with the demo and signed The Pharcyde to the label in 1992, in time to record and release the debut album, Bizarre Ride II the Pharcyde. The album quickly earned praise for the group, and ultimately became one of the most successful and influential albums of the era, particularly in the alternative hip hop genre. The song “Passin’ Me By,” originally featured on The Pharcyde’s demo, was released and charted on Billboard’s Hot 100.

Since then, “Passin’ Me By” has gone on to become a classic hit, and The Pharcyde has since released the albums Labcabincalifornia (1995), Plain Rap (2000), and Humboldt Beginnings (2004.) The albums spawned the additional singles: “Running,” “Drop,” “She Said,” “Trust,” and “Knew U.” The Pharcyde continues to perform live, and has recently made appearances at a number of events, including a performance at the Roxy Theater for the group’s own twentieth anniversary celebration of their debut album.

Due to the success of that appearance, The Pharcyde launched a tour in 2012, and released a new single, “Still Got Love ( Bizarre Tribe Megamix.)”