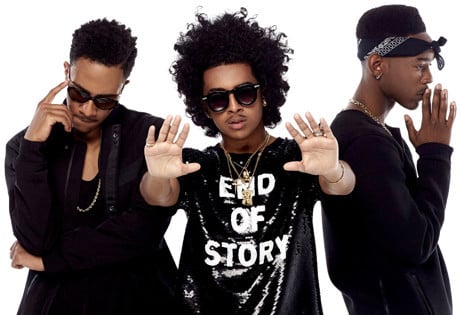 WeddingEntertainment.com makes it easy and trouble-free to check availability and pricing for booking Mindless Behavior or any act in the business for your wedding. If we don't book an act for you, our service is free. For over 26 years we have booked and produced thousands of events for our clients worldwide. We can also handle everything necessary to produce the show for one all-inclusive price so there are no surprises. Simply fill out an entertainment request form and a booking agent will contact you to discuss the possibility of booking entertainment for your wedding.

Mindless Behavior came together in 2008, when Walter Millsap, Keisha Gamble, and Vincent Herbert assembled a boy band and began a two-year quest to coach the boys to stardom. The young members – Ray Ray, Prodigy, Princeton, and Roc Royal - are all still in their young teens, but that has not stopped a whirlwind launch to success that has Mindless Behavior now touring with heavy-hitters such as Justin Bieber, Janet Jackson, and the Backstreet Boys.

Mindless Behavior released their debut album, #1 Girl, in 2011, and their follow-up, All Around the World, in 2013. The group performed their hit single “My Girl,” on the Today Show in 2010, after their debut album landed at the top of the Billboard 200 upon its release. Since that time, Mindless Behavior has been nearly everywhere: headlining the BET Closer to My Dreams Tour; headlining the SCREAM Tour alongside the OMG Gitlz and Hamilton Park; and embarking on their first solo tour, alongside openers Lil Twist, Kayla Brianna, and Jacob Latimore, hitting twenty-five cities. Additional hit singles “Mrs. Right” and “Girls Talkin Bout” have Mindless Behavior enjoying an ever-expanding group of fans, often drawing thousands of young teenager girls to their meet ’n’ greet opportunities.

Currently, Mindless Behavior boasts the number one artist page on MTV.com and they rank as the number two artist for UMG in terms of online standing. Mindless Behavior is just getting started, and the boys continue to record, perform, and tour, bringing their music to fans around the nation.