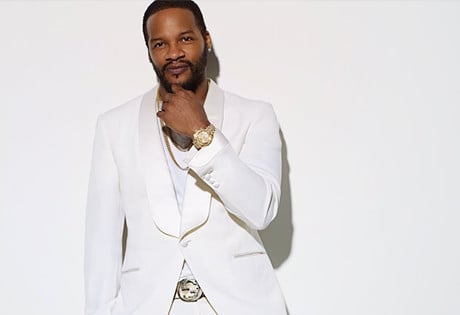 Looking to book Jaheim entertainment for a wedding anywhere worldwide?

WeddingEntertainment.com makes it easy and trouble-free to check availability and pricing for booking Jaheim or any act in the business for your wedding. If we don't book an act for you, our service is free. For over 26 years we have booked and produced thousands of events for our clients worldwide. We can also handle everything necessary to produce the show for one all-inclusive price so there are no surprises. Simply fill out an entertainment request form and a booking agent will contact you to discuss the possibility of booking entertainment for your wedding.

The American R&B singer known as Jaheim was born Jaheim Hoagland in 1978. Jaheim grew up in a housing project outside of New Brunswick, New Jersey. Jaheim lost his father when he was still a toddler, and while growing up he was greatly influenced by his grandfather, who sang with a number of notable groups in the 1950’s. It was no surprise when Jaheim showed a talent for music as well, and by the time he was a teenager, he’d even won multiple competitions at the Apollo Theater’s famous talent shows.

Jaheim’s talents caught the attention of Divine Mill Records, which signed him as an artist in 2000. One year later, Jaheim released the debut album Ghetto Love, featuring the songs “Could It Be,” “”Just in Case,” and “Anything,” all of which rose into the top twenty on the R&B charts and the top forty on the mainstream charts. Ghetto Love rose to platinum status, and set the stage for a career which has now lasted well into the next decade.

Since Ghetto Love, Jaheim has released the albums: Still Ghetto (2002), Ghetto Classics (2006), The Makings of a Man (2007), and Another Round (2010.) The albums have spawned multiple chart-topping hits, including: “Fabulous,” “Put That Woman First,” “Everytime I Think About Her,” “Struggle No More (The Main Event),” “Never,” “I’ve Changed,” “Ain’t Leaving Without You,” and “Finding My Way Back.” Jaheim also appears as a guest artist on Nelly’s hit single, “My Place.”

For his achievements in music so far, Jaheim has been nominated for three Grammy Awards, including Best R&B Album, Best Male R&B Performance, and Best R&B Song. Jaheim most recently released the album Appreciation Day, which arrived in 2013.