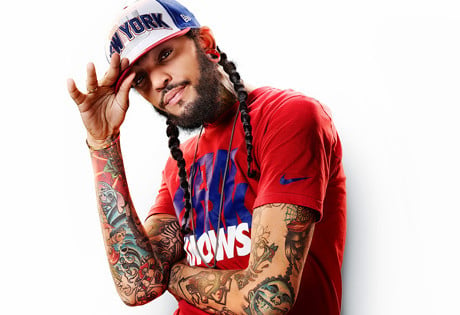 WeddingEntertainment.com makes it easy and trouble-free to check availability and pricing for booking Travie McCoy or any act in the business for your wedding. If we don't book an act for you, our service is free. For over 26 years we have booked and produced thousands of events for our clients worldwide. We can also handle everything necessary to produce the show for one all-inclusive price so there are no surprises. Simply fill out an entertainment request form and a booking agent will contact you to discuss the possibility of booking entertainment for your wedding.

Travis “Travie” McCoy was born in 1981 in Geneva, New York. As a child, Travie developed an interest in art as an outlet for expression, largely in part to his temporary immobility, as he was bound to a wheelchair for a number of months following an accident. By the time Travie was fifteen, he was working in a tattoo parlor as an artist, and he began traveling to New York City to compete as a rap artist. His talents as rapper eventually surpassed his artwork, and in high school he and classmates Matt McGinley decided to form their first band.

After high school graduation, Travie McCoy began attending an art institute, but left before completing so that he could focus on his music career. Eventually, Travie and Matt added Disashi Lumumba-Kasongo and Eric Roberts to their lineup and Gym Class Heroes, as they were now called, was signed to an independent record label. As Cruel as School Children was released as their debut, and McCoy and his band mates quickly found themselves with a gold album and a few hit singles: “Clothes Off!,” “Cookie Jar,” and “Cupid’s Chokehold.” The Quilt followed in 2008, and was equally successful.

Travie McCoy embarked on a solo career, however, in 2010, even though Gym Class Heroes had not disbanded. His first solo endeavor, Lazarus, was released in June of that year, and features contributions from a variety of notable producers and vocalists: Bruno Mars, Lucas Secon, T-Pain, and Cee Lo Green, to name a few. Notable singles include “Need You” and “We’ll Be Alright,” and the album experienced moderate success. Travie McCoy spent the summer of 2010 traveling, first in support of Rihanna, and then in support of Bruno Mars.

In addition to his own solo projects, Travie McCoy is featured on a number of albums and songs for other artists, including Livin’s City of Brotherly Love, Jessica Jarrell’s “Up and Running,” and Cheryl Cole’s “Yeah Yeah.”  McCoy has also teamed up with Nicholas Scimeca to form Tequila Mockingbird and the two have embarked on projects as a duo, releasing the songs “Snowglobe” and “Brooklyn Basement.”  Most recently, Travie McCoy collaborated with Stooshe for their single “Love Me,” and sang with Deuce on his album Nine Lives.

Despite his past challenges in overcoming a drug addiction, Travie McCoy is still going strong with no signs of stopping. After a challenging detox program, he has committed to clean living and seeks to support others facing similar addictions by being very vocal about his experiences.  McCoy continues to record, perform, and tour.