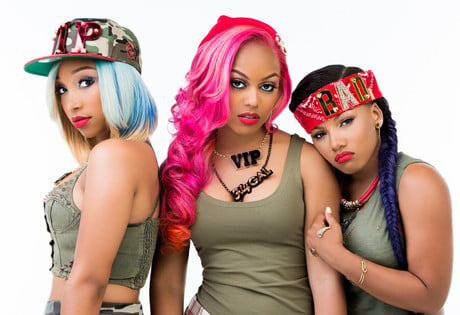 WeddingEntertainment.com makes it easy and trouble-free to check availability and pricing for booking OMG GIRLZ or any act in the business for your wedding. If we don't book an act for you, our service is free. For over 26 years we have booked and produced thousands of events for our clients worldwide. We can also handle everything necessary to produce the show for one all-inclusive price so there are no surprises. Simply fill out an entertainment request form and a booking agent will contact you to discuss the possibility of booking entertainment for your wedding.

The OMG Girlz came together to form the Officially Miss Guided teen girl group in 2009, when Keisha Miles and Tameka Cottle brought the Atlanta girls together at the end of the millennium’s first decade. The group’s first single, “Ain’t Nobody,” was released in 2010, and following a series of performances on BET, the girls found themselves with a career on the rise.

The song “Haterz,” OMG Girlz’s second single, was released shortly after their debut, and was followed by “Pretty Girl Bag.” The group’s most successful single at the time, “Pretty Girl Bag” brought the girls instant recognition nationwide, sending millions of viewers to their YouTube channel to view the video. “So Official” came next, and in 2011 the OMG Girlz embarked on a national tour, the Scream Tour: Next Generation, alongside Jacob Latimor, Mindless Behavior, Diggy Simmons, and other notable stars on the rise. While on tour, the OMG Girlz featured their latest single, “Gucci This (Gucci That)” and expanded their fan base even further.

With the current lineup of Zonnique Pullins (Miss Star), Bahja Rodriguez (Miss Beauty), and Breaunna Womack (Miss Babydoll), the OMG Girlz released their debut album, Officially Miss Guided, in 2013. Their most recent single, “Where the Boys At?” has their fans buzzing about what comes next, since the OMG Girlz are just getting started.