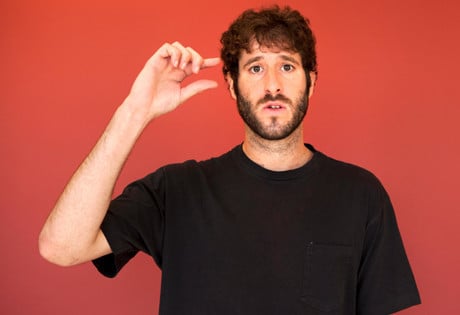 WeddingEntertainment.com makes it easy and trouble-free to check availability and pricing for booking Lil Dicky or any act in the business for your wedding. If we don't book an act for you, our service is free. For over 26 years we have booked and produced thousands of events for our clients worldwide. We can also handle everything necessary to produce the show for one all-inclusive price so there are no surprises. Simply fill out an entertainment request form and a booking agent will contact you to discuss the possibility of booking entertainment for your wedding.

After recognizing his creative talents, the company for which Lil Dicky worked moved him into their creative/advertising department, when he began to craft ads for clients. Lil Dicky soon fell in love with rapping, and started to write and record his own music. Eventually, he began posting his music videos to YouTube, where they became viral sensations with millions of viewers. His song “Ex-Boyrfriend” was among his most successful, reaching over a million hits in only a one-day period. With a growing fan base, Lil Dicky turned to Kickstarter to launch a campaign to raise funds for his continued creative efforts.

So far, Lil Dicky has released the mixtapes So Hard (2013) and Hump Days (2013), and his debut studio album, Professional Rapper, rose to the top of the mainstream, R&B, and rap charts upon its release in 2015. The album’s title track, which features Snoop Dogg, rose to the number one spot on the R&B charts.