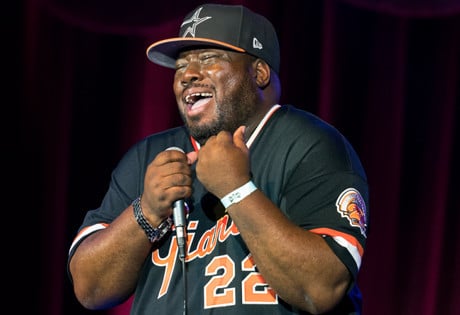 Looking to book Rahzel entertainment for a wedding anywhere worldwide?

Look no further than WeddingEntertainment.com! We make it easy and stress-free to check availability and pricing for booking Rahzel or any other act in the business. With over 26 years of experience in the industry, we have booked and produced thousands of events for clients worldwide.

The American beatboxer known as Rahzel was born Rahzel M. Brown. Rahzel grew up in the Bronx area of New York and was largely inspired by such burgeoning musicians as Doug E Fresh, the Fat Boys, and Grandmaster Flash. As a young man, Rahzel focused largely on honing his skills as a vocal percussionist, initially to “gain attention,” but soon it became clear that he had talents which set him apart from his contemporaries.

Rahzel joined the Roots in 1990, and quickly rose to fame for his talents as the group’s beatboxer. The Roots is often credited with legitimizing hip-hop and bringing it to mainstream appeal, and Rahzel was a significant part of that breakthrough. As a member of the Roots, Rahzel contributed to some of the band’s most significant hits, including: “Distortion to Static,” “Proceed,” “Silent Treatment,” “Clones,” “What They Do,” “Adrenaline,” and “You Got Me,” featuring Eve and Erykah Badu.

After releasing his debut solo album, Make the Music 2000, Rahzel began to appear as a feature artist on a number of songs in collaboration with other artists, including: “Southern Gul” (with Erykah Badu); “It’s a Must” (with Rakim); “Steal My Kisses” (with Ben Harper); “Children’s Story” (with Everlast); “Cold Blooded” (with Common); “Bam Bam” (with Toots & the Maytals); and “The American Way” (with The Crystal Method.) His career gained a significant mainstream boost when he re-interpreted Aaliyah’s hit “If Your Girl Only Knew”; in re-naming the track to “Your Mother Only Knew,” the song became an significant hit and was considered to be a groundbreaking achievement.

Rahzel continues to perform and record as a solo artist and in collaboration with other artists. His most recent collaborative contribution is on the single, “Bad Self,” recorded with Rhymefest.