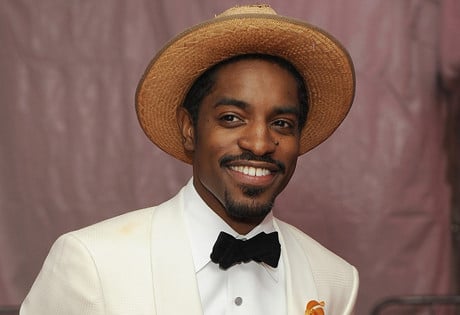 Looking to book Andre 3000 entertainment for a wedding anywhere worldwide?

WeddingEntertainment.com makes it easy and trouble-free to check availability and pricing for booking Andre 3000 or any act in the business for your wedding. If we don't book an act for you, our service is free. For over 26 years we have booked and produced thousands of events for our clients worldwide. We can also handle everything necessary to produce the show for one all-inclusive price so there are no surprises. Simply fill out an entertainment request form and a booking agent will contact you to discuss the possibility of booking entertainment for your wedding.

The rapper and producer known as Andre 3000 was born Andre Lauren Benjamin in 1975 in Atlanta, Georgia. Before Andre rose to fame as one half of the hip-hop duo OutKast, he began performing while in high school. It was there, while he was still a teenager, that Andre met Antwan “Big Boi” Patton, with whom he formed the group OutKast in the early 1990’s.

As half of OutKast, Andrew signed with the LaFace label and released the platinum-selling debut Southernplayalisticadillacmuzik in 1994. The hit albums ATLiens, Aquemini, and Speakerboxxx/The Love Below followed, bringing OutKast critical and commercial success, including a Grammy Award and the international number one hit “Hey Ya!” OutKast’s last album together was a group, Idlewild, was released in 2006, after which time Andre launched a solo career as Andre 3000.

Since 2007, Andre 3000 has contributed vocals to a number of chart-topping hits in collaboration with other artists, including: “Millionaire” (with Kelis); “What a Job” (with Snoop Dogg); “Green Light” (with John Legend); “Dedication to My Ex (Miss That)” (with Lloyd); and “Party” (with Beyonce.) Andre also launched an acting career, appearing in the films: Four Brothers (2005), Revolver (2005), Scary Movie 4 (2006), Fracture (2007), Semi-Pro (2008), and All Is by My Side (2013.) Andre also has his own fashion line, the Benjamin Bixby line of clothing, which has been highly successful since its launch in 2008. Andre is also a huge supporter of animal rights causes, lending his name to such high-profile organizations as PETA and publicly discussing his choice to live a vegan lifestyle.

Most recently, Andre and Big Boi reunited as OutKast, in time for their 20th anniversary. The duo returned to the stage for a 40-date tour in 2014, bringing them to such notable festivals as the Coachella Valley Music and Arts Festival in California.